Piers Morgan you are a pompous ass.

I had to ruminate for 3 days before writing this.  You obviously have a problem with Gay Men. During Prince Poppycock’s final performance you could not resist the urge to sabotage his chance to finish on a high note. It was as disgraceful display – even for you. It was unnecessary to “X” him because he did not stand a snowball’s chance in hell of winning up against Michael Grimm and Jackie Evancho. He was, however, proud to perform before millions of viewers one last time and you had to piss on his parade. If you wanted to humiliate him I’m afraid you failed.

I’m unaware of your personal history but I would guess you come from a wealthy family and you have been pampered and coddled your entire life. You have a sense of superiority and entitlement. Your arrogance is overshadowed by your callousness. You have no common sense whatsoever.

I would not have felt betrayed by your actions if you had also “X” Fighting Gravity for their flawed performance which you yourself pointed out to them in their post performance exchange with the judges. Had you given them the “X” in the middle of their performance I could have said you were only being an ass. As it stands your are a pompous ass and a homophobe.

I have usually agreed with your assessments over the years. We share a similar sense of what talent really is. I am critical of those who put themselves out there and fall short of my expectations. Prince Poppycock did not disappoint me with his performance and Fighting Gravity did. They were flat with the NASA performance and had a couple of mistakes during it. They were downright awful with their last performance and made mistakes. You never gave them the “X” – never. They deserved it and you did not give it to them. It’s disgraceful and you should be ashamed. 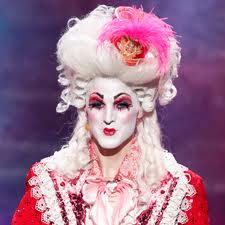 Prince Poppycock was a valiant performer even during his illness. He stood on stage and gave his all. His originality was obvious. His voice was beautiful. His talent is undeniable. Beneath that flamboyant facade of make-up and outlandish costumes is a gentle, beautiful young man who has overcome many challenges throughout his life. He never let others curb his pursuit of happiness through performance.

Shame on you Piers Morgan.