“We R Who We R” by Kesha – New Ryan Yezak Video

I love this video. I love Ryan’s use of metaphor with the Superhero/Disco theme. The Eye Candy is delicious and I love the song. My only wish would be to see more of “Xander” (Alexander Stabler) – maybe next time!

I had a conversation with a friend recently about flamboyant Gay men. He said he thinks they are a hindrance to the Gay Rights Movement. I said if it weren’t for them there would be no Gay Rights Movement because the vast majority of Gay men are hiding in plain sight. The point is the men who are on the front lines in the fight for an end to Homosexual Discrimination are ones like the performers in Ryan’s videos. They are visible and proud of who they are. Respect our brothers. They are doing the hard work for us by forcing society to acknowledge us. They keep the heat turned up on those who would oppress us. They show them for what they really are – bigots and demagogues. GOD SAVE OUR QUEENS!!!

And now – the video:

Donald Trump disappointed me in a big way. His attempt to ‘Out’ one of the contestants on his show “The Apprentice” created another negative image of Gay men in general and he should be ashamed of himself for doing so.

During the ‘boardroom’ meeting portion of the episode which aired November 4, 2010 Mr. Trump listened as

had shown signs of a ‘Man Crush’ for a model their team had used for a photo shoot during the competition. He repeatedly suggested David himself was ‘Gay’ which solicited snickering and laughter from everyone on camera.

Mr. Trump pointedly turned to David and asked him if he was Gay and if he wanted to ‘Come Out’ then and there on the show. David, of course, denied the accusations and reminded everyone he was the father of 5 children to which Mr. Trump and others said ‘that means nothing these days’. Donald Jr. even said ‘That’s so Gay’ during the meeting.

I was appalled by this. This is the atmosphere that Gay men must compete in for jobs in America. The prejudice and hostility that was shown during this episode of The Apprentice was shocking. If Cyndi Lauper had been at the meeting I’m certain she would have challenged everyone for mocking Gay people and for snickering at the idea that David might be Gay. Cyndi Lauper was one of the celebrities involved in last seasons ‘Celebrity Apprentice’ and was claimed as a ‘close’ friend by Mr. Trump. I wonder if she saw this episode and how she reacted?

I really thought highly of Donald Trump prior to this public statement of his homophobic attitude. I have been a fan of his for decades. His appearnces on TV have always drawn my attention. I have never seen him ridicule and belittle someone about their sexuality before. I may have missed the signs of his prejudice before but I’m well aware of them now.

I would like to call for him to apologize for this behavior. I would like for him to state publicly his support for the Gay Community and for the end of DADT. I want him to help us achieve equality under the law and freedom from discrimintation.

If you agree with me please join me in posting a protest of this ‘branding’ of a suspected homosexual at: http://www.nbc.com/the-apprentice/in-the-boardroom/2010/11/week-8/

I posted a protest at that address under the name JL2

Examples of same-sex behavior can be found in almost all species in the animal kingdom — from worms to frogs to birds — making the practice nearly universal among animals, according to a new review of research on the topic.

“It’s clear that same-sex sexual behavior extends far beyond the well-known examples that dominate both the scientific and popular literature: for example, bonobos, dolphins, penguins and fruit flies,” said Nathan Bailey, a postdoctoral researcher at the University of California, Riverside.

Same-sex behaviors in different species are not all equivalent, the review finds. For instance, male fruit flies sometimes court other male flies, but this behavior is due to a missing gene that gives the flies the ability to distinguish between sexes, said Bailey, a co-author of the review. “That is very different from male bottlenose dolphins, who engage in same-sex interactions to facilitate group bonding, or female Laysan Albatross that can remain pair-bonded for life,” he added.

The review also found a gap in the literature: While many studies have tried to understand why same-sex coupling exists and why it might make sense in terms of evolution, few have looked at what the evolutionary consequences of this behavior might be.

“Like any other behavior that doesn’t lead directly to reproduction — such as aggression or altruism — same-sex behavior can have evolutionary consequences that are just now beginning to be considered,” Bailey said. “For example, male-male copulations in locusts can be costly for the mounted male” and this cost may put evolutionary pressure on the locusts, he said. As a result, a larger number of males may secrete a particular chemical that discourages the mounting behavior, he added.

In their future research, Bailey and Marlene Zuk, a biology professor at UCR, plan to try and address questions about the evolutionary outcomes of same-sex couplings, focusing on the Laysan Albatrosses.

The review article was published in the June 16 issue of the journal Trends in Ecology and Evolution, and the study was funded by the UCR Academia Senate. 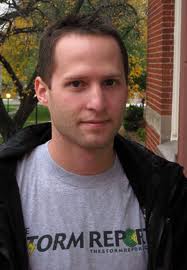 Matt Hughes, 30 years old, has died from injuries sustained at home. He had been in the hospital with his family and friends at his side in Kansas a week or so after the event that caused his injury.

I have read many blogs tonight after we watched the latest episode of the TV show he appeared in – “Storm Chasers”.

The following paragraphs are a copy of a comment I posted on one of the blogs about the possible cause of his death:

“Sean Casey may be the most disgusting person I’ve ever seen on TV. I believe his decision to bring on a new team member had a role in the events that led to Matt’s death. During the memorial episode devoted to Matt I noticed the expression on Matt’s face went from one of happiness to one of withdrawal the moment the new member walked into the room.

Sean is a terrible manager. He demoted the TIV driver a couple of episodes ago and that person quit the team (I’ve already forgotten the poor guys name). In my opinion, Matt saw the writing on the wall regarding the new buxom beauty Meteorologist who has a PhD. He knew what a slimy snake Sean is and that his own position within the team was precarious because Sean never acknowledged his contributions or worth. It is obvious to me that Sean Casey felt threatened by the young man with stars in his eyes and more enthusiasm and courage than the middle-aged has-been who couldn’t find a tornado if it were heading directly for him.

Matt was a piece of eye candy and I loved to watch his every move and listen to his every word. I looked forward to the few moments of air time that he was given in each episode. I believe his future was so bright and that was what Sean could see as well. Matt was on track to become a household name while Sean was on track to oblivion.

I realize Matt had other issues to deal with in his personal life. I believe I know what might cause him to feel so hopeless. So many self-inflicted deaths of young men recently that were brought about by bullies such as Sean Casey. The recent incident involving that school board member in Arkansas who wrote on Facebook that all “members of a certain hated minority” should commit suicide (his statement was not so diplomatic) sheds light on the reason many beautiful young men take their own lives. The fear of being disowned by loved ones or discriminated against by society in general and by governmental and religious persecution has been the catalyst for so much sadness.

The pain and sorrow Matt’s family must feel is shared by so many who came to know Matt through his role on Storm Chasers. It is my hope they will eventually discuss openly the reasons they believe brought on this tragedy. I will be eagerly waiting their thoughts. We loved Matt, too.”