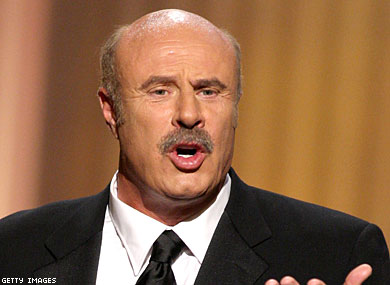 Dr. Phil advises a parent whose son likes to play with girls’ toys and wear girls’ clothing to “take the girl things away, and buy him boy toys” on his website’s “Ask Dr. Phil” section.

Robbie tells Dr. Phil that her 5-year-old son likes to play with Barbies and likes to wear girls’ clothing, which she doesn’t think is normal. In the segment, she asks the talk-show host how to deal with his behavior.

“There are developmental stages in kids, and it is not unusual, particularly for young boys, to experiment and get stuck on certain stimulus items,” he says. “This is not a precursor to your son being gay.”

Dr. Phil, who recently has increased his support for gay and lesbian teens, particularly when it comes to bullying in schools, then suggests that the solution is to take the girls’ toys away from the boy.

“Direct your son in an unconfusing way. Don’t buy him Barbie dolls or girls’ clothes. You don’t want to do things that seem to support the confusion at this stage of the game. … Take the girl things away, and buy him boy toys.

“Support him in what he’s doing, but not in the girl things.”

Gay and Lesbian Alliance Against Defamation President Jarrett Barrios said in a statement to The Advocate that Dr. Phil’s advice sends the message to children that they should confirm to the “narrow stereotypes of gender roles.

“When a media personality like Dr. Phil sends a message to viewers that their children should conform to narrow stereotypes of gender roles, it can make the process of understanding and appreciating who you are more difficult for young people,” Barrios said. “What’s important here is that every child has the opportunity to express who they are in a way that is safe and nurturing because at the end of the day, our society thrives on children and adults whose interests are as diverse as the people in it.”