Teacher Not Indicted In Student ‘Hit’ Case
By Curt Yeomans
cyeomans@news-dailycom
Posted: 11:55 PM May 27, 2010
Taken from The Henry Daily Herald (our local newspaper) 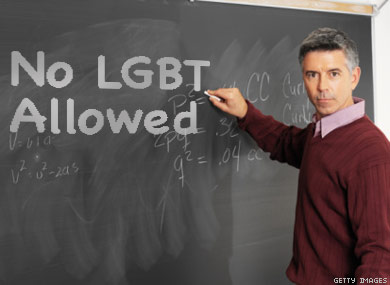 A former Mundy’s Mill High School special education teacher, who allegedly sought a “hit” on a 16-year-old student, whom the educator believed to be gay, will not face criminal charges in Clayton County Superior Court, the county’s district attorney said on Thursday.

The teacher, Randolph Forde, had been facing a charge of making terroristic threats against the student, for allegedly offering a 17-year-old classmate of the student $50 to kill the 16-year-old, on Oct. 9, 2009.

The case had been bound over from Clayton County Magistrate Court on Oct. 14, but it sat for several months, waiting to be handled by the grand jury. In January, the Clayton County Board of Education terminated Forde’s employment, upon the recommendation of a tribunal panel, which heard two days of testimony from witnesses.

District Attorney Tracy Graham Lawson said she brought in “nine to 10” witnesses, including the intended victim of the alleged “hit,” to testify before the grand jury on Wednesday. In the end, however, the evidence did not prove to be enough to sway jurors toward handing down an indictment, she said.

“They returned a ‘No Bill,’ which means they did not find probable cause to hand down an indictment,” Lawson said.

Forde’s attorney, Borquaye Thomas, said the next step for his client is fighting to get the educator’s job re-instated with Clayton County Public Schools. Thomas said he plans to file an appeal of the school board’s decision to fire Forde, in Clayton County Superior Court today. “We’re working on getting his job back,” Thomas said. “I’ll be happy to just get that.”

The teacher’s attorney said the State Board of Education has already upheld the Clayton County school board’s decision, although no decision regarding Forde has yet been posted on the Georgia Department of Education’s web site.

Even though the grand jury has decided not to indict Forde, Clayton County Public Schools officials, in a written statement, said the district will not reverse the previous decision to fire the teacher.

“The matter regarding Randolph Forde’s employment with Clayton County Public Schools is closed,” according to the district’s written statement. “Mr. Forde, like any other person, can apply for any position posted by the district.”

Terance Madden, an Atlanta-based attorney for the family of the 16-year-old student, contends the alleged request for a “hit” was tied to an incident which occurred a week and a half earlier, in which Forde allegedly took the youth out of a math class, and asked him if he was gay. A day after that incident, there was allegedly a verbal argument between Forde and the youngster, in the same math class.

On Oct. 9, Forde is alleged to have approached the 17-year-old at his school bus, and offered him money to perform the “hit.” The teacher allegedly identified the 16-year-old victim as the intended target, by writing the youngster’s name on a piece of paper for the 17-year-old.

Thomas said the grand jury’s decision to not indict in the case was not a surprise to him, or his client, because it was “what we expected, based on what we knew about the facts of the case.”

With the grand jury’s decision, the criminal portion of Forde’s case is likely over, according to Lawson. But, the family of the intended victim of the “hit” will continue to push the DA’s office for some sort of legal punishment for Forde, according to attorney Terance Madden. “We want the district attorney to use every, and any means to prosecute this case,” he said.

The family’s attorney said the 16-year-old student is “devastated” over the lack of an indictment, and blamed Lawson for it.